Minyoung is  a PhD Student in the Brain and Cognitive Sciences department at MIT. Her current research interest lies in the middle of designing a biologically plausible artificial neural network and finding neural basis of neurodevelopmental/neurodegenerative diseases. The two may seem to be detached but she believes they are aligned in that both would provide insights on intelligence.

She earned her M.S in Computer Science from Stanford University, specialized in the Artificial Intelligence track. She spent 8 years in Silicon Valley working on database and machine learning projects, focused on computer vision problems such as  multi-object detection and tracking, targeted for autonomous driving. She started her PhD to achieve an in-depth understanding of the human brain. Her ultimate goal is to bridge the gap between human and artificial intelligence by fusing together this knowledge and her expertise in ML.

She recently developed an interest in neurodegenerative diseases such as Alzheimer's disease, while researching microglia-the resident immune cells in the central nervous system. She thinks finding root causes of such diseases, hence directly helping patients, would be as rewarding as building better artificial intelligence for human convenience.

When she's not conducting research, she skis and snowboards in Lake Tahoe, Whistler, Vail, and Ludlow. She recently started her part-time job as an entry-level ski/snowboard instructor at Okemo and obtained certifications in PSIA-AASI Alpine Level 1 and Snowboard Level I.

HOME: About Me
PUBS/PRESO/DEMO ↠

Working as a ski instructor

A single memory is stored across many connected brain regions 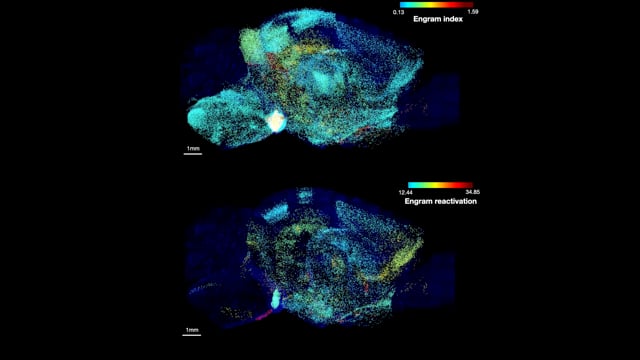 The Analysis of Visual Motion: A Comparison of Neuronal and Psychophysical Performance